Sendelica was the nearest I ever got to ‘Space Rock’… i played Bass with the guys for a couple of years, filling in for Glenda.

Back to Lemmy… so I first encountered him in the flesh, so to speak, was in 1979 at the Rehearsal Studios owned by my keyboard player Dave Davies (not THE Dave Davies I should add…) in my old Band (don’t laugh!!) called ‘Cathedral’ (we were crap!) called Wharf Studios, which was located on The River Thames… Our band was rehearsing there but on arrival, I did not know which of the 3 rooms we were in that night… So I made my way along the corridor past all 3, but could not hear anything, so I opened one of the large sound-proofed outer doors to Studio B, then the inner door but realised to my horror, I was about 6’ away from a legs-astride, head thrown back, Lemmy who just as I entered the room, bellowed with much vigour and rapidity “1, 2, 3, 4!!” and launched at immense Volume into ‘The Ace of Spades’ and before I could turn and exit the place, he and the rest of Motorhead basically blew me clean out of the room… They were so fucking loud, that when my Band did start to rehearse an hour or so later after my ears recovered, even at full blast, we could still hear Motorhead above us. So we gave up for the night, but sadly not for good! 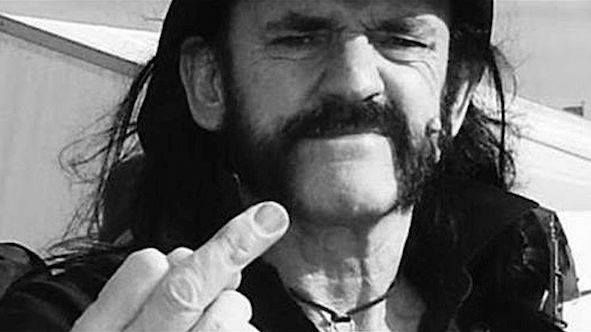 The next time I met Lemmy, was at the Watford Gap Services on the M1 in 1980 with Thin Lizzy, whilst returning from a gig ‘Up North’ somewhere. Lizzy, Madness and Motorhead had all congregated on the place, along with their respective Crews as we all queued up impatiently for a very early Breakfast – it was around 2.00am… This time, I got to actually talk to him as he and Phillip were Buddies and he introduced me to the Warted One. A very pleasant chap indeed, and good conversationalist as we all discussed Life, the Road and the burnt Sausages we had been dished up…

The last time I saw Lemmy, was literally ‘in the flesh’ at a very seedy Club in Soho, just up from the old Marquee Club in 1985. I was meeting a friend there who was late, so I used the time to go for a ‘Jimmy Riddle’ and made my way along the dingy, dark, dank corridor to to the Loos at the rear of the joint… on entering the bogs, I came across (not quite!) Lemmy directly in front of me, in a doorless cubicle, sitting astride the throne with his Black famed Hat on, a beer in one hand and a cigarette in the other, with a Blonde and a Brunet on their knees giving him a Blow Job… “FUCK OFF!!!” he bellowed at me… and I laughed and said “Fair enough!” and left him and them to it.

In 1987, I was interviewed by Neville Martin for the British ‘Guitarist’ Magazine. Low and behold, but who should be featured on that month’s Cover? but the great Man himself,… Lemmy. Funnily enough, my elder Brother Stephen had worked years before on Lemmy’s iconic Blonde Rickenbaker 4001 Bass, except back then it was Black at at the time. Lemmy had asked Stephen (who had worked on The Clash’s Guitars around the same time) to ‘Clean’ the Bass up. Well, it was so rancid especially the Neck and under the Pickguard, where there was mold growing, my Brother suggested to strip the Bass back to the Wood and finish it in a Clear Varnish, which he did.