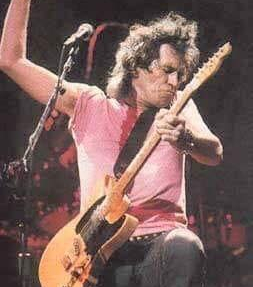 Somebody on Facebook posted this photo of Keith Richards earlier today. I’m not exactly sure when it was taken, but I figured out what happened to my Pink Vest that I lent him in 1982.
I say ‘lent’, more like he filched it… as on occasion, he would come out with some odd things, to say the least. Once, he asked me if I could let him ‘borrow’ a pair of my Trainers, that may not sound too weird, except I was wearing them at the time. I did, and never saw them again.
Similarly, he had a rather nice Les Paul TV Special which had ‘Tumbling Dice’ stickers on the body. He told me he was in a bar in the US somewhere, where a local band were playing. He was invited up to play, and the guitarist let him use his guitar… Keith took a shine to it because of the stickers, and he confidently made off with it.
I always kept a change of clothes in my Road Cases, including shoes, as you never quite knew what may be needed with that band. 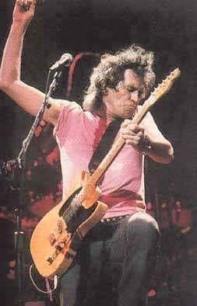 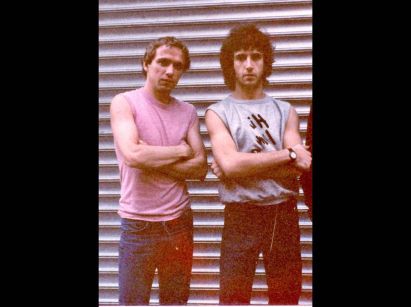 The other photo is of me in NYC, aged 25, with said vest, and my old friend Perry Margouleff, whom I was staying with at the time, whilst working for the Stones.
Perry had(s) quite an amazing guitar collection, which at the time of this photo, included a couple of ‘58 Explorers, three V’s, two Standards, two Gretcsh White Penguins, as well as Strats and Teles, all laying around in his Loft.
This particular day, found us wandering around The Village, grabbing lunch and inevitably talking about Guitars.
You can just make out Perry’s Vest, which I had had several made… the front reads ‘Hi, I’m Jane Rose’ and on the back, it says ‘n you’re Fired!’.
KR’s secretary – now his ‘Manager’ – at the time, was someone I never got on with (nor did anyone else). She had a habit of firing people, or trying to. One day in the Stones office in New York, I heard her screaming at Chuch (the band’s long-time Roadie) from her office “YOU ARE FIRED! GET OUT!”… and he came through the door chuckling. He then minced around the office, affecting her nasty, shrill voice, saying ‘Hi, I’m Jane Rose… and you’re fired!’. He said, she’s always firing me – or trying to! But added, he works for the Stones, not her. So I immediately went and had a load of t-shirts and vests made up, which she hated.
Keith had one, as did Chuch, myself and Perry.
That’s one reason there is no mention of Chuch or myself in Keith’s Autobiography ‘Lies’… sorry, ‘Life’.
Anyway, there’s my vest.